Located on the north side of the River Thames in central London, RNLI Tower not only handles more than 500 callouts each year, it is also one of the RNLI’s few stations that is afloat. As such, it has to contend with a tidal range of six metres and the challenges that come with being on what is by far the UK’s busiest inland waterway. 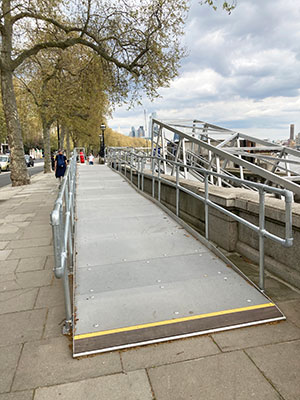 The works undertaken by Walcon involved the fabrication and installation of two, 20m aluminium bridges plus a ramp for disabled access that together connect the platform to the Embankment towpath behind. The ramp in particular was a bespoke project involving detailed design plus high precision manufacture to ensure fast and smooth passages for injured persons being taken ashore on wheeled stretchers en route to hospital.

The full scope of the project required the replacement of a single, steel, link span bridge which reached its end of life. However, as there are two landing recesses built into the embankment wall it was decided that two aluminium bridges should be installed to give redundancy in the event of one or the other requiring maintenance. The upstream bridge was fitted first into the vacant opening. The original bridge was then removed and the new downstream bridge installed in its place. The on-site assembly and installation works took four weeks to complete with the station fully operational throughout. The works were overseen by infrastructure specialist Herbosch-Kiere NV.

The entire project was a major logistical challenge. The new structures were delivered by road to Tilbury and then taken up the Thames by crane barge to the site in the heart of London, where the old bridge was lifted out and new ones lowered into position. The project also required technical approval from local government and Covid was still a major issue at the start of the project.

Tom Kent, South East Regional Estates Manager at the RNLI, said: “The RNLI engaged Walcon Marine Ltd for the supply and installation of two new linkspan structures and associated works for Tower Lifeboat Station in central London. These works involved careful planning and execution in an extremely busy environment whilst also enabling the station to remain fully operational. Walcon conducted these works in a professional and capable manner, always ensuring the work fitted around station activity.”

James Walters, Managing Director of Walcon Marine, added: “It was a pleasure to be working with the RNLI once again, and at such an iconic location. It certainly was a challenge to be working on a compact but active site where the personnel had to able to deploy immediately without hindrance, but it all worked well and we are confident that the new bridges will give many years of reliable and smooth service.”