The Ocean Conservation Trust has launched Blue Meadows, a new landmark project that will deliver a holistic approach to seagrass protection, regeneration and restoration in the UK.

This vitally important work will protect and restore seagrasses, one of the most valuable and biodiverse habitats on the planet, providing multiple benefits to the environment. Blue Meadows is designed to let leisure and commercial boats know where seagrass exists and work with them to minimise disturbance of the meadows,  allowing them to regenerate and flourish.

Seagrass meadows provide nurseries for commercially important fish species, are biodiversity hotspots with a single hectare of seagrass providing sanctuary for up to 80,000 fish and 100 million small invertebrates, they are also home to rare and endangered species like seahorses and stalked jellyfish.

Where seagrasses are present, they reduce the impacts of coastal erosion by stabilising sediments on the seabed and combat climate change by absorbing and storing vast amounts of carbon. Seagrasses are up to 35 times more efficient at absorbing carbon than rainforests and despite only covering 0.2 per cent of the seafloor, store 10 per cent of the ocean’s carbon.

Mark Parry, development officer for the Ocean Conservation Trust, said:“Since the 1930s, up to 90 per cent of Zostera marina seagrass beds have been lost, and despite the importance of these habitats, they are still in decline. The International Union for the Conservation of Nature estimated in 2014 that seagrasses are still declining by 7 per cent a year globally. This estimate makes it the fastest disappearing habitat on the planet.

“In the UK alone, around 500 hectares of seagrass beds are being lost every year, mainly due to human activity. To many boaters, it is not clear where the seagrass meadows are, so they are unaware of the damage being caused when anchoring or fishing. That is why the Ocean Conservation Trust’s primary goal is to protect existing seagrass meadows and allow them to regenerate. Over the next five years, we are aiming to protect 10 per cent of all UK seagrass, approximately 700 hectares!” 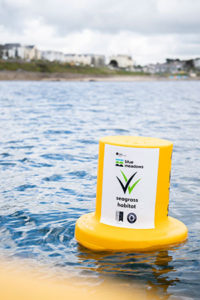 A pilot has already begun in Falmouth where buoys have been placed in three key areas to protect over 20 hectares of seagrass meadows, equivalent to 20 football pitches. A local boat user engagement campaign has also begun and base line bio-diversity measurement has been conducted with support from e-DNA analysis experts.

The second project site is already lined up in Torbay where a further 50 hectares are planned for protection. This is being supported by a number of commercial and delivery partners.

Whilst protecting and allowing existing seagrass meadows to regenerate, the Ocean Conservation Trust is also working on refining a holistic process to enable large scale seagrass restoration. A 400 square metre purpose-built facility has been built in Devon, dedicated to plant aquaculture, supported through funding from the Green Recovery Challenge Fund. Here, a team of experts are researching different restoration techniques. This is the largest seagrass nursery site in the UK.

Roger Maslin, CEO of the Ocean Conservation Trust, said:“This is a significant step forward for our environmental work at the Trust and the most ambitious seagrass project yet in the UK. Blue Meadows is our holistic approach to seagrass protection, regeneration and restoration, which is vital to ensure a healthy future for this incredibly important species. We need the important work of restoration to be supported by protection and that’s why we will work together with Harbour Authorities, businesses and our scientific partners at Imperial, Keele and Plymouth Universities to fast track protection, whilst developing scalable, cost effective techniques for restoring what we have already lost.”

To find out more about this exciting project and help protect a meadow visit www.bluemeadows.org.