This weekend Luna Rossa Prada Pirelli battle it out against INEOS TEAM UK on Waitemata Harbour to become the Challenger of the 36th America’s Cup presented by PRADA.

The best of 13 races, the first to win seven becomes the Challenger.

INEOS TEAM UK surprised everyone in January’s Round Robins, against the Italian and American teams, with their radical change in performance after the December races. The Brits then took advantage of more time off while those teams raced in the PRADA Cup Semi-Final. Luna Rossa approach the Final off the back of a dominant encounter against American Magic, beating them by four wins to zero in two days of racing. The Italians were able to out perform even in strong winds, previously considered their weak point, without losing their strength in light breezes.

Ahead of the PRADA Cup Final INEOS TEAM UK have had their base doors closed for several days suggesting that they are carrying out modifications that involve more than simply fiddling, fettling and polishing.

The differences between the British and Italian boats are considerable, both on a technical level and in terms of handling. For example, Luna Rossa has two helmsmen, Francesco Bruni and James Spithill, who never change position on the boat. Also, on the Italian boat there are eight grinders, some of which are double tasked and assist in manoeuvres.

The organisation on board INEOS TEAM UK is quite different. It respects a more traditional division of roles: Sir Ben Ainslie is the helmsman, Giles Scott the tactician and the two move from one side to the other of the boat at each tack or gybe as do the mainsail trimmer Bleddyn Mon. Another important characteristic of INEOS TEAM UK is that the British boat only has six main grinders. They work on particular transmission system and the grinding gear always turn in the same direction.  In this way the British can count on five free people during the regatta, the helmsman and tactician, the mainsail trimmer and the two flight controllers that sometimes helps grinding.

Ahead of the weekend’s racing Sir Ben Ainslie said: “We have worked very hard over the period and our team has stuck to the task of trying to get every ounce of performance out of the boat. It has been a tough period, especially for the shore team. During the last 10 days or so we have been back on the water trying to get the intensity up and making sure we are match fit. We have to be ready to race in any condition. We have to take the Italians on, and match them in whatever wind – and we are looking forward to it.”

After losing to the British in the Round Robins, Max Sirena, Luna Rossa Team Director and Skipper, spoke about the subsequent changes made to the Luna Rossa AC75: “Since we raced INEOS TEAM UK last time, we have new foils, a new modified mast, a new set of sails, a lot of development on the software system on the boat and a lot of improvements especially in the communications on board. We made a lot of mistakes when we raced against INEOS TEAM UK and we want to come out with one mistake less than them this time.”

The first race of the PRADA Cup Final will take place on 13 February with a scheduled start at 4:12pm NZT and Luna Rossa will be the first to enter on port tack. It is reasonable to assume that BRITANNIA would hope for strong winds to perform at their best, while Luna Rossa would prefer steady winds. Which of the two challengers will win?

The CA has launched its campaign to reduce the impact…

END OF THE ROAD FOR THE BRITS

The British team fails to reach the America’s Cup Match.…

The British Sailing Team’s Tokyo 2020 athletes will be among…

Vendée Globe hero Pip Hare has arrived back on dry… 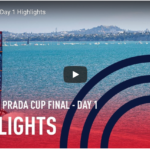 After Auckland’s lockdown, which interrupted the next planned races in…

Menu
This website uses cookies to improve your experience. If you continue to use this site, you agree with it.
Ok