8 months ago
The Scottish Fisheries Museum has welcomed the arrival of a specially crafted 67ft Fore Mast, which was commissioned as part of the £1 million conservation of the Reaper and makes the last of the great First-Class Scottish Herring Luggers stronger than she has ever been in her 118 year history.
The new mast built for this ‘Rare Survivor’ from the golden age of sail is almost as high as Reaper is long (70ft) and made from Douglas Fir, a species traditionally used for ‘Fifie’ masts because of its superior strength.
As climate change has begun to impact on the ring strength of Douglas Fir, the wood components underwent a complex lamination process. This has made the new mast 30 per cent stronger and 50 per cent lighter than traditional pole masts, significantly reducing the stresses under sail. This along with the mast lifespan of 30 – 40 years instead of the usual ten, will extend Reaper’s life.
Additional strengthening work to the hull carried out as part of the conservation has also given Reaper, one of 46 core vessels in the UK’s prestigious National Historic Fleet kept in seagoing condition, probably the strongest hull of any ‘Fifie’ ever built. 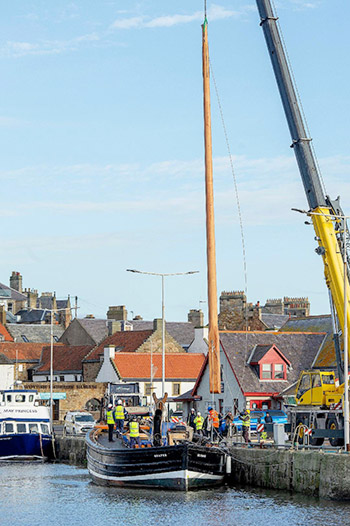 Together, the strengthened Fore Mast and hull ensure the museum’s flagship historic vessel can set sail from her home port of Anstruther.
As a tribute to the many sponsors of the conservation programme, particularly a generous late donation from within Scotland’s pelagic fleet that enabled the museum to commission the manufacture of the new Fore Mast, the museum plans to take the unusual step of naming the new mast. It will be called ‘Forever Grateful’.
The new mast is almost the length of a regular tennis court or swimming pool. It made a striking sight travelling up to the Scottish Fisheries Museum in Anstruther from Bristol where it was manufactured by Noble Masts, a family firm manufacturing masts approved by Lloyds of London for clients across the world.
Taking receipt of the new Fore Mast, Ian Goodyear, managing director of the Scottish Fisheries Museum, said:
“We are immensely grateful to Scotland’s fishing companies and communities and to the Scottish Government for their continued support of Reaper and enabling us to commission this special new Fore Mast.
“Conservation of a seagoing historic vessel like Reaper is always ongoing. Using the latest mast making and hull strengthening techniques, we have ensured that she is stronger and more resilient than ever.
“Sailed by members of The Museum Boat Club since joining the Museum’s sea-going fleet in 1975, this icon of Scotland’s rich fishing heritage has welcomed more than 180,000 visitors on board. Many more will now experience this iconic ‘Fifie’ and share in the story of Scotland’s booming herring industry of the past.”
The £1 million conservation of the two-masted, 70ft, 50 tonne Reaper began in 2018 and was made possible by funding from the Scottish Government, Museums Galleries Scotland and fishing industry sponsors. The main contractor for the initial hull refit, Babcock International Group, also made a charitable donation.
Following conservation work, Reaper, which has starred on screen, most recently in the hit TV series ‘Outlander’ and film ‘Tommy’s Honour’, reopened to the public in August, at her mooring on Anstruther Harbour, once one of Scotland’s busiest fishing ports.
The Reaper was built in Sandhaven near Fraserburgh and launched in 1903 at the height of the worldwide boom for Scottish salt-cured herring. Then, the tight daily turnaround of 24 hours to catch, gut and salt the ‘silver darlings’ led to the development of these fast, powerful deep sea sailing luggers or ‘drifters’.
With the hull’s smooth wine-glass design and powered by wind alone with their huge, heavy, square lugsails stretching over 3,355sq ft, ‘Fifies’ became the most popular fishing vessel on Scotland’s North Sea coast during the 19th and 20th centuries.
Although ‘Fifies’ looked effortless and graceful when under sail, leaving harbour and turning with the sun in long-held tradition, managing the heavy gear and herring nets, which often extended well over a mile long, was physically demanding and skilled work for the crew of ‘8 men and a boy’.
On shore, Reaper, which held the Shetland record for a catch of 223 crans (around 39 tons and almost 250,000 herring) in the 1930s, supported various industries. These included the ‘Herring Lassies’ who gutted 60 herrings a minute on the gutting tables or ‘farlans’ before packing them in salted barrels for export to Europe.
The Scottish Fisheries Museum, in picturesque Anstruther in the East Neuk of Fife, is home to a Nationally Recognised Collection of vessels, fishing equipment, exhibits, photographs, reminiscences and artworks telling the rich story of the ‘boats, fish and folk’ of Scotland’s fishing industry.
The Museum’s 22 vessels are listed on the UK’s National Register of Historic Vessels. Reaper and White Wing (the two sea-going boats), Research (the last remaining First Class ‘Zulu’ in Scotland) and the Lively Hope (a ring-net herring boat) are part of the National Historic Fleet alongside vessels such as the Cutty Sark, RRS Discovery, MV Kyles and HMS Victory.