An award-winning piece of technology has been installed at Plymouth Yacht Haven in Mount Batten to remove pieces of floating plastic from the sea.

The Seabin has been installed in the marina to collect debris, plastics and microplastics from the water with the ability to collect more than 1 ton of marine waste each year. Made from recyclable materials, the Seabin draws water in before pumping it through a fine mesh and collecting the resulting waste. The marina team at Plymouth Yacht Haven can then collect the waste from the basket and recycle it.

“Working and living by the water, we see first-hand the impact of marine litter and its effect on marine wildlife around Plymouth”, commented Steve Kitchen, marina director at Plymouth Yacht Haven. “Our marina staff took the initiative to introduce more initiatives to make our local environment cleaner and more sustainable for everyone, from litter picking on Mount Batten beach, to this new Seabin installation.” 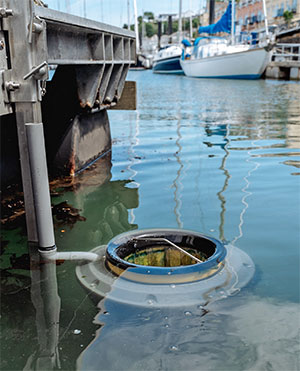 After being developed in 2016 in Australia, there are now almost 1000 Seabins worldwide with this bin being the first permanently located in the city. The device, which is made from fully recycled materials, has the ability to hold up to 20kg of litter at a time, and can capture over 1.4 tons of debris per year.

Just months after Plymouth City Council declared an urgent need for ocean recovery in a ‘Motion for the Ocean’, the city became the UK’s first National Marine Park. The Seabin at Plymouth Yacht Haven is one of the first new installations since the Council’s motion was launched.

Steve continued: “As residents and businesses, we all share responsibility to keep the waters in Plymouth as clean and biodiverse as possible. The Seabin has a reputation worldwide to help clean up oceans and protect marine wildlife, so it is great to have this installation at Plymouth Yacht Haven. We are delighted that Boskalis Westminster agreed to work with us on this installation.”

The bin was donated by Plymouth-based marine firm, Boskalis Westminster. Isobel Loxton from the company explained the company have “worked for many years in the Plymouth area supporting the Ministry of Defence. We want to play our part in reducing the amount of plastic waste around our coastline and with the Seabin this can be targeted to provide tangible results for the local marine communities we work in”.

Isobel continued: “We all agree that we hope to live in a world where devices like the Seabin are not necessary. Litter should not be in the ocean in the first place. For now, we are pleased that we  are able to contribute to reducing the amount of plastics in the water. But, more importantly, we need to work with Plymouth Yacht Haven to use the Seabin to educate those who live, work and visit coastal areas of the importance to protect our oceans.”

“We are not stopping with the Seabin”, Steve continued. “This month we have installed bug hotels, wildflower gardens and bird feeders around the marina to increase the biodiversity on-site. We partnered up with various local organisations to run workshops with our customers to increase awareness and education around these issues. The team behind the autonomous Waste Shark vessel ran demonstrations on-site and we also organised litter picks on Mount Batten beach.”