In 1969, Sir Robin Knox-Johnston was the first sailor to sail around the world, non-stop and without assistance. It took him 312 days, alone against the elements. In 2019, Jean-Luc Van Den Heede repeated the feat by winning the first Golden Globe Race in 211 days. 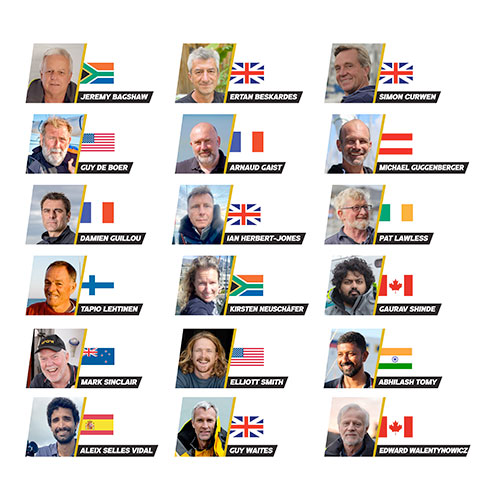 Now 18 sailors, across 11 nationalities, are taking part in the next GGR, starting on 4 September. Among them is Frenchman Damien Guillou, who worked as part of the Vendée Globe team of Jean Le Cam in 2016 and Kevin Escoffier in 2020. There is also the Indian skipper Abhilash Tomy. Originally from Mumbai, he is one of the most prominent sailors in India and during the 2018 Golden Globe Race, after 83 days at sea, Abhilash was injured and had to be rescued thousands of kilometres from Australia.

All the boats in the race are 32 – 36ft monohulls, built before 1988, whose technical characteristics are in line with the Suhaili, on which Sir Robin Knox-Johnston won the event in 1969. The only concession is the presence on board of new safety equipment, including a secure survival bag containing geo-localised communication equipment, which can be activated in case of absolute necessity, as well as a makeshift rigging in case the skippers dismast.

A festive village will open on 20 August in the Vendée Globe square, and on that day a big firework display will be fired over the bay to celebrate the adventurers. For a fortnight, the Golden Globe Race Village will be the heart of the sailing world giving visitors the opportunity to meet the skippers before their departure as well as enjoying boat parades, concerts and more.

Yannick Moreau, Mayor of Les Sables d’Olonne and President of the Agglomeration, said: “Les Sables d’Olonne, port of the legendary Vendée Globe, is proud to welcome this new series of the Golden Globe Race. This adventure carries with it our soul and our history: the courage to take to the open sea, and set off into the unknown. We are going to experience a great adventure that has many surprises in store for us and promises to keep us on our toes as the competitors are so motivated to become legends. Friends of the sea and of maritime adventure, welcome to Les Sables d’Olonne, one of the most beautiful bays in the world.”