The story of ‘Me Too’

In Autumn 2019 Lymington SailAbility was gifted an Artemis 20 fixed keel sailing boat ‘Me Too’ by the estate of Hilary Lister – the iconic and inspirational record-breaking quadriplegic sailor, who loved sailing with a passion. 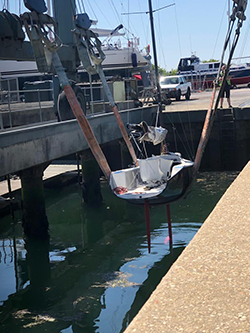 She bought the boat new and had it converted for a ‘sip-and-puff’ system that allowed her to sail by herself – an activity that gave her complete freedom to control her own sea faring destiny.

Following her death in 2018, it was Hilary’s wish that Me Too should be actively used again by disabled sailors, so when the call came through from the RYA asking if Lymington SailAbility were interested in this project they leapt at the possibility.

Only a few of these boats were made and a bit of research was required to restore the boat to a state whereby their sailors could take advantage of its qualities. It was soon discovered that the boat designer was local to Lymington; Simon Rogers agreed to let them use the original drawings. His brother, Kit Rogers, also offered to quote for the restoration work to be carried. Sadly, however, the cost of the project was more than the charity could then afford, so the project was shelved.

In spring 2021, Tom Morton, vice chairman, was approached by Robert Houston from London charity BOOST, which helps disadvantaged people with their sporting ambitions. He was looking for a sailing charity with a project that he and his late aunt, Rosalind Molly Hughes, could support. Tom suggested the Artemis 20 project and Robert loved the idea and provided the backing to start. However, with Covid everything came to an abrupt stop. 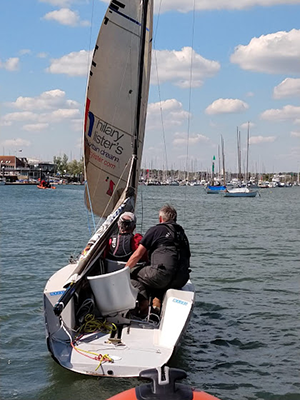 By summer 2021, the project got underway again. The sip-and-puff system and the special seat were removed, the entire deck and hull were repaired and prepared for the new seating, steering and adjustments to the rigging were undertaken, but ongoing Covid problems meant that the restoration dragged on and on. However, now the restoration work is completed.

After a few tweaks to the rigging and the keel lifting system, Me Too was towed into the Lymington River; her sails  raised and as the wind gently filled them, she heeled over and gracefully sailed into the Solent.

Lymington SailAbility face a big learning curve with Me Too this season. She is very well set up for teaching sailing and Lymington Town Sailing Club has offered to let her join in with some of the informal racing. It will be a great challenge for the less able sailors to learn how to sail her.

Lymington SailAbility would particularly like to thank the family of Hilary Lister who donated the boat and to Kit Rogers, MD of Jeremy Rogers Ltd, who designed the boat and completed the restoration work. Also to Robert Houston whose charity BOOST gave the refurbishment grant in memory of his aunt.