The largest museum to open in the UK during 2020, The Box in Plymouth, has announced its new 2021 programme ready for the public re-opening on 18 May 2021.

The Box first opened its doors to visitors at its delayed public launch on 29 September 2020.  It has so far welcomed more than 30,000 visitors, despite being open for a total of just nine weeks.

Here’s what visitors can expect:

WAMPUM: STORIES FROM THE SHELLS OF NATIVE AMERICA: A major new exhibition featuring a native American wampum belt created specially for The Box by 100 Wampanoag craftspeople alongside seven historic wampum belts on loan from the British Museum and Saffron Waldon Museum.  The exhibition will explore the history, art and culture of the Native Americans who met the passengers of the Mayflower and ensured their survival.   Alongside The Box’s historic Mayflower Exhibition, Wampum is the first exhibition in the UK to be solely curated by the Wampanoag people and puts the native American experience of the colonisation of Massachusetts at its heart.

THE SECOND PEIRCE PATENT: The oldest existing state document of New England giving theMayflower passengers permission from the King James to settle America, takes its place within The Box’s Mayflower 400: Legend and Legacy exhibition alongside a large collection of new artefacts from overseas.

SIR JOSHUA REYNOLDS: Outside of London, The Box holds the UK’s single largest collection of paintings by Reynolds who was born and lived most of his life in Plymouth. New for 2021, The Box will be displaying the Port Elliot Collection, a collection of rarely seen paintings by the leading portrait painters of the 18th century including Reynolds, George Romney and Thomas Lawrence.

THE BOX KITCHEN & BAR: Reopening in May, the restaurant at The Box is run by Executive Chef Nat Tallents, one of the best young chefs in the UK, Tallents is the new star of The Great British Menu on BBC Two. As part of the re-opening in May, Tallents will also open her newest culinary venture, THE LITTLE BOX, an aluminium and glass café serving socially distanced take away drinks and food.

SEPTEMBER BLOCKBUSTER EXHIBITION: An international contemporary art exhibition opening on September 25th. A must-see blockbuster show that will draw visitors from across the country. Details to be announced mid-June.

Two further historic buildings and visitor attractions are part of The Box family. These are Plymouth’s famous striped red and white lighthouse Smeaton’s Tower and Elizabethan House – one of the few remaining buildings from this era in Plymouth.

ELIZABETHAN HOUSE: One of the finest examples of an Elizabethan boarding house in the UK. The Grade II listed Elizabethan house on Plymouth’s historic New Street has been closed to the public since 2015, having undergone a significant 1.7million architectural conservation and restoration.  Visitors are taken on an immersive, multi-sensory journey through Plymouth’s history by the house and her 400 inhabitants, from wealthy Elizabethan ship merchants in 1600 to slum families from the 1920s.

SMEATONS TOWER: The centrepiece of Plymouth Hoe. Standing at 72 feet and looking out to sea, the iconic red and white lighthouse has become one of the South West’s most famous landmarks.

The Box will re-open with its full launch programme of nine permanent exhibitions, showcasing Plymouth’s rich heritage and underlining The Box’s standing as a museum, gallery and archive of national importance. They include:

THE FIGUREHEADS: A magnificent display of 14 monumental ships’ figureheads 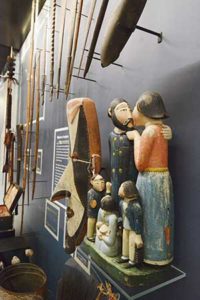 100 JOURNEYS: Great explorers and their discoveries, from Drake to Scott and beyond

OUR ART: From Reynolds to Lenkiewicz, a showcase of Plymouth’s best loved native artists

PORT OF PLYMOUTH: A celebration of Plymouth’s naval and maritime heritage

PHOTO ALBUM: A display of memories and photographs from Plymouth’s past

Safe social distancing measures will be in place at all of The Box’s buildings, with visitors being asked to book tickets in advance until Government advice changes. All exhibitions are free of charge to visit except for ‘Mayflower 400: Legend and Legacy’ which is £5 (free to Plymouth residents and under 18s). Tickets will be available from The Box website: https://www.theboxplymouth.com/ from mid April.